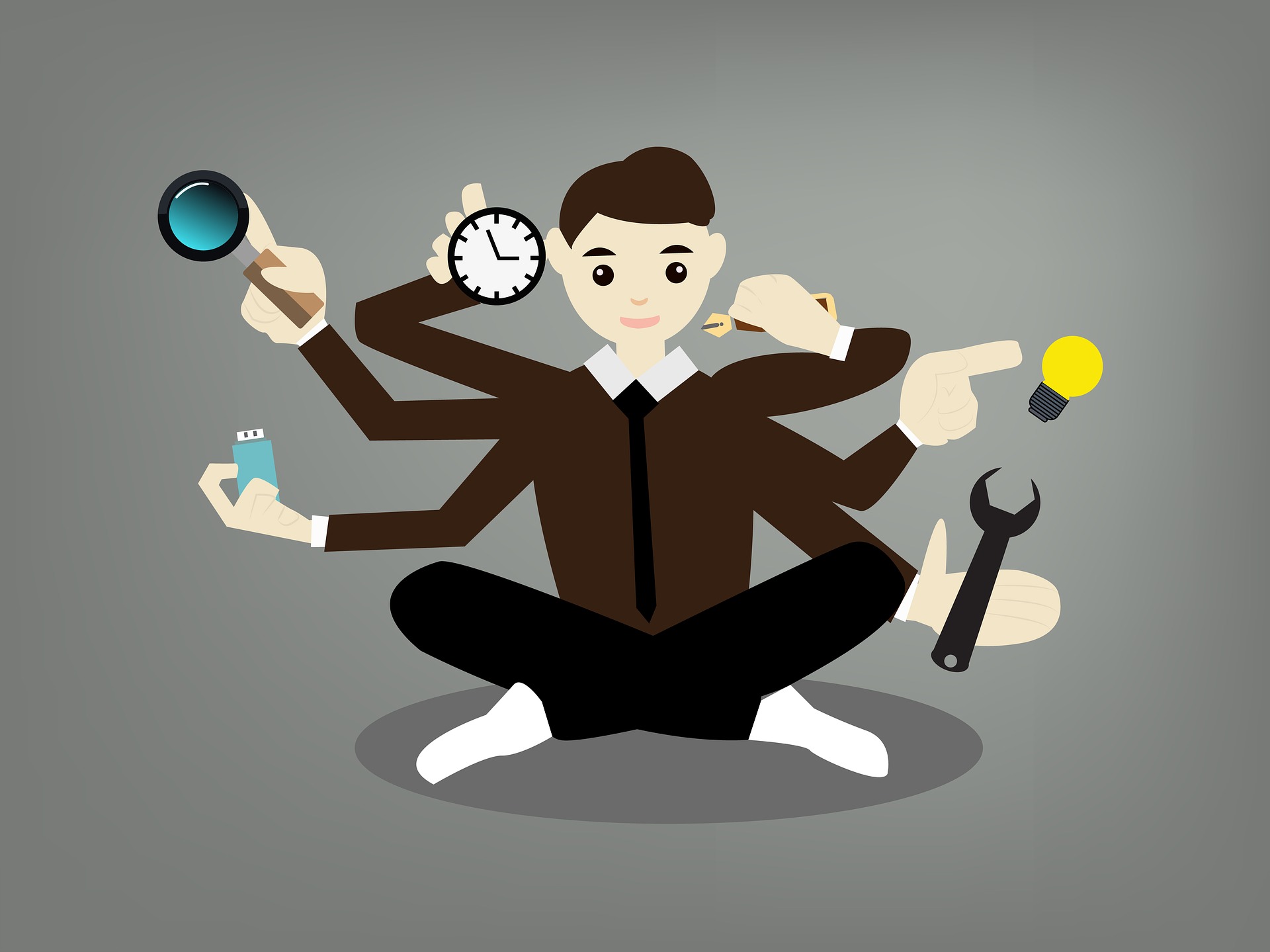 I just landed at O’Hare airport in Chicago. After getting off the airplane, I did three things. I ordered an Uber, read my email, and checked my text messages.

Flipping back to Uber to see how soon my driver would arrive, a dialogue box popped up asking for my name, address, and phone number.

“I guess I need to re-authenticate my credentials,” I thought to myself and proceeded to provide the information. Then another dialogue box asked for my employment history, annual salary, and Social Security number.

Then I realized the insanity was mine.

In the midst of doing three or four things at once, I had unwittingly begun to apply for an Uber credit card. Yikes! Exiting out immediately, I discovered I’d walked to the wrong waiting area and had to rush to a completely different terminal to catch my ride.

I believe it’s time to reexamine the ubiquitous habit of multitasking for what it is: a foolish pursuit of efficiency. In defense of that statement, I offer you three multitasking myths:

Multitasking Myth One: It Actually Exists

This first myth, like Big Foot, the Abominable Snowman, and the Loch Ness Monster, is that multitasking actually exists.

It’s not possible for the human brain to do two things at the same time. What we call multitasking is not multitasking at all but context shifting with a side of neurological tomfoolery.

“On a neurological basis, the human brain does not really process multiple tasks at once; instead, it toggles back and forth, losing time on every switch,” journalist Laura Vanderkam reports in 168 Hours: You Have More TimeThan You Think. “Though we’re only talking factions of a second, this is, of course, plenty of time to crash your car if you’re trying to drive and send a text message.”

Distinguished MIT professor Sherry Turkle concurs in Reclaiming Conversation, “When we think we are multitasking, our brains are actually moving from one thing to the next, and our performance degrades for each new task we add to the mix. Multitasking gives us a neurological high so we think we are doing better and better, when actually we are doing worse and worse.”

Now context shifting is okay if the tasks we’re doing are unimportant, like folding laundry and watching TV. We can always rewind a show and watch what we missed. But when we’re in a team meeting and texting—or handing out winning Oscar envelopes and posting on Twitter, like what happened in 2017—something’s going to go wrong. Very wrong.

Okay, I get it, what’s the point of presenting any more myths if multitasking doesn’t exist. The argument should end there, right?

I’ve announced Multitasking Myth One to more than a few nonprofit leaders, who refuse to believe me. So I try a less existential train of thought and offer real, hard data from twenty years of research by Jonathan Spira.

“For every interruption,” Spira reports in his brilliant book Overload, “it takes ten to twenty times the amount of the interruption time to return to the previous task. It can take five minutes after a mere thirty-second interruption to get back on track. Fully one-third of every worker’s day is taken up by the endless cycles of unnecessary interruptions.”

Heads nod knowingly when I travel down this path, every nonprofit leader I’ve worked with has had more than one day ruined in this way. But upon further review, we discover the overwhelming majority of interruptions on those days were self-generated by, you guessed it, a futile attempt at multitasking.

Are you an unbeliever yet? Here’s one more myth.

Multitasking Myth Three: It’s What I Need to Do to Be Successful

The pressure to conform in this area of life and leadership is intense. Everyone checks their email in meetings and everyone (gasp!) texts while they’re driving. You should too, right?  If, that is, you want to be a successful leader.

In marketing—marketing the brand of a nonprofit or a person—what causes either to break out of the pack and get noticed by the masses? Being exactly the same as everyone else or being different? You’re right, being different. Not just a little different, but a lot different. Refusing to multitask can be that difference for you and your organization, a good different that makes a bold statement about what you really care about.

But there’s another more powerful reason to reject multitasking: not just being different, but being present. Context shifting between two generic tasks is one thing, but when we do it with another human being, an employee, a volunteer, a colleague, or a spouse, we contribute to the deterioration of that relationship. We make a not-so-subtle statement that the person in front of us is less important than whatever we turn our attention to.

What’s the answer to this vexing problem? Here are three multitasking solutions:

The first solution to multitasking is uni-tasking. Uni-tasking is disciplining yourself to do one thing at a time and one thing only. The reason why this requires discipline is that the brain rewards task switching with a hit of dopamine. This chemical high feels good, but, like any drug, its false sense of euphoria fails us.

Doing only one thing at a time means turning off your phone, disabling your notifications, and focusing like a laser on the task, or the person, before you. It’s being fully present in the moment and being completely aware of the needs of the moment.

Let me warn you, however, your first attempts at this will fail. You’ll find yourself grabbing for a WMD—wireless mobile device—for a dopamine hit within a matter of minutes. But I assure you, after a few weeks that addiction will wear off, and you’ll be able think again in a focused, concentrated manner.

What do you do, then, with all that email and all those text messages? You can’t just let them go. Can you? Maybe some of them you can (See: Multitasking Solution 3: Prune), but most of them you have to attend to. Batching is how you do that.

We tell fundraisers when they need to make outbound calls to donors that they should schedule a block of time and do them all at once, rather than making one or two calls every hour or so. A protected time block allows people to do this work without interruption, and grouping calls together gets them into a rhythm that generates momentum.

That’s batching: completing common tasks together during an allotted period of time in a way that accelerates their execution. And, just like you would with your fundraisers, make a game out of how many emails and text messages you can process in any given batch.

Instead of a constant stream of digital interruptions, I have three batching sessions in my day where I process my texts and email. At first these time blocks went on forever, but now I execute in them quickly and efficiently. As a result, I have a freedom and a joy in my day that’s absolutely priceless.

“I have yet to see an executive, regardless of rank or station, who could not consign something like a quarter of the demands on his time to the wastepaper basket without anybody noticing their disappearance,” Peter Drucker famously wrote 50 years ago in The Effective Executive.

It’s still true today (except for the wastepaper basket thing). The question, of course, is which 25%? That’s why I’ve used the imagery of pruning for this third multitasking solution.

The nonprofit parallel is perfect. Your energy can be diverted in a typical day to dozens of things that deliver no real outcome—big beautiful leaves and long flowing branches—a total waste of a time. Ask yourself, what activities contribute directly to achieving your goals? What are the most important things of the most important things? What are your highest priorities? Define these. Do these. Obsess over these and let everything else go.

Multitasking, then, becomes unnecessary because you’ll only be doing that which is essential: producing fruit.

Whether you’ve applied for a credit card while reading your email, checking your text messages, and rushing to catch an Uber, or done something even more costly while multitasking, the point of this article is this: stop it! Start becoming a uni-tasker, doing one thing at a time and one thing only. Batch your digital communication and get rid of the things you shouldn’t be doing at all.

The end result will be greater productivity, both professionally and personally, and that will make you a better leader and a better person.

The Four Laws of Nonprofit Leadership

There are laws that run the universe. Physical laws, like the law of gravity or…